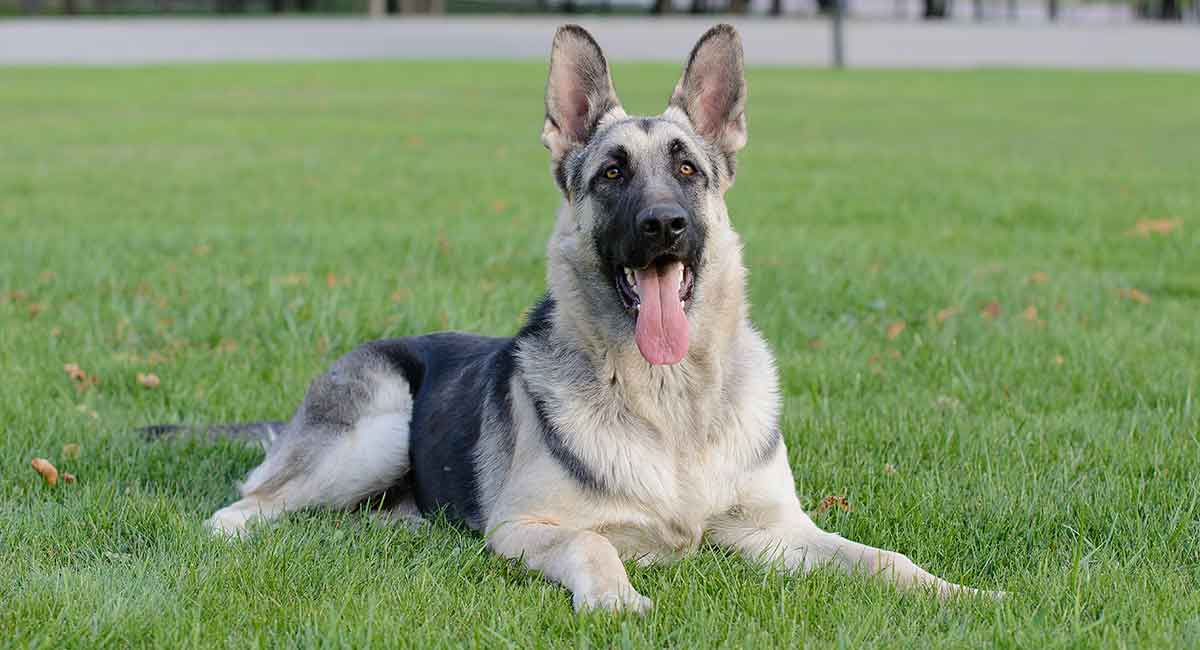 Welcome to our guide to the Silver German Shepherd.

If you love German Shepherd Dogs, but like the thought of owning one in a more unusual colour than the traditional black and tan, the silver German Shepherd may well have caught your eye.

In this article, we’ll take a look at this specific silver coloration, whether it’s distinct from the other coat colors, and how it may affect the health and temperament of your dog.

If you’d like to read more about the German Shepherd breed in general, you can read our full review here.

History and Origins of the Silver German Shepherd

It doesn’t have a distinct history separate to the rest of the breed.

This means that this color also won’t affect your dog’s character, fitness, or health.

The history of the German Shepherd Dog, of course, can be traced back to Germany.

The German Shepherd Dog, also frequently referred to as the GSD, has shown its versatility as a breed.

Expanding from its pastoral herding roots to showing its utility as a service dog and in police and military canine units worldwide.

There are officially 11 colors within their breed description.

These include bi-color, black, black and cream, black and red, black and silver, black and tan, blue, gray, liver, sable, and lastly, white.

So, within the range of German Shepherd colours, while black & silver is more unusual than some others, it’s just one example of the variety of colors which can be seen within this breed.

If you’re expecting a silver Shepherd to be pure silver, that’s not normally the case.

It’s more likely that any silver GSD will also have large areas of black on their body, face, and legs.

This may be why silver grey German Shepherd Dogs are less common.

Washed out colors, including blues and livers, are considered a serious fault.

The white coat color is undesirable within the official description, and leads to disqualification from the show ring.

Despite this, white German Shepherds have quite a fan club outside of the show ring.

Next, let’s take a look at the genetics behind how different coat colors are expressed in this breed.

The Genetics of the Silver German Shepherd

Coat color genetics are complex, with the exact genes responsible for silver coloration yet to be fully identified.

See more: Everything about Feeding Dishes for Shrimp | Pink Army

Within the German Shepherd breed, the gene for sable is dominant over all other colors and patterns.

The first registered German Shepherd Dog was sable in color.

Despite this, it’s not seen as often as the black and tan preferred by many breeders.

It’s likely that silver is a recessive gene, which could be why it’s not seen as often as some of the other colors.

While you may see a working silver sable Shepherd, that would be a very unusual color combination.

Bear in mind as well that the final color of a puppy will only be clear once the outer coat has fully developed.

This means that a relatively dark coated puppy could develop into a mature black and silver German Shepherd Dog.

We think it’s important to emphasize that you should always prioritize the temperament and health of a puppy you’re considering taking home, rather than the color of their coat.

This quote from the founder of the breed, Max von Stephanitz, is an excellent one to bear in mind:

As we’ve established that the silver Shepherd Dog is no different to a GSD of any other color, their appearance is going to be in line with the breed standard.

They have a muscular, strong body, with pointed ears and a dense double coat.

You may have seen parent dogs advertised as “black saddle silver German Shepherd,” but what does that actually mean?

The “saddle” refers to the patch of darker colored fur, which covers the majority of the dog’s back.

Any German Shepherd Dog with silver coloration is less likely to have a silverback German Shepherd pattern. It’s more likely that they will have a darker patch across their back.

The double coat of the German Shepherd does require brushing every few days to remove loose hairs.

They will also shed twice a year, leaving a significant amount of hair behind!

Some German Shepherds have a long coat, but as this is a recessive trait it’s not as commonly seen as the shorter coated GSD.

This means you’re much less likely to see a combination such as a silver long haired German Shepherd.

German Shepherds have a reputation for being fiercely intelligent, intensely loyal, and enthusiastic about work or exercise.

This is a brave and courageous breed, as well as being more aloof than some others.

German Shepherds will bond quickly and strongly with their families, but don’t expect them to want to make friends with everyone they meet.

They are good around children, and often take on a guardian role for those within their own family.

As with any breed, be sure to set boundaries for your own and visiting children.

Readmore: Gross! My Dog Just Ate Bacon Grease! What Should I Do Now?

Make sure your German Shepherd has the choice to leave any social setting with strangers if they wish, and make sure guests know to respect your dog if they choose not to interact with them.

GSDs don’t generally like being left alone for long periods of time.

This is definitely something to bear in mind if you work away from home.

Puppy training classes are an excellent way to start your German Shepherd’s education, as well as starting to socialize them with other people and dogs.

Their high level of intelligence means they are a joy to train, and enjoy positive, reward-based training methods.

Dogs which don’t get enough exercise may start to display unwanted and destructive behaviors as a reflection of frustration and boredom.

Mental stimulation is just as important as physical exercise for German Shepherds.

Be sure to challenge yours with activities such as agility, or learning tricks, as a way to keep both their mind and body stimulated.

Health of the Silver German Shepherd

Unlike some other breeds, the coat colour of a German Shepherd Dog has no bearing on its health.

So to find out what the health of a black and silver Shepherd is likely to be like, we can take a look at the GSD breed as a whole.

Unfortunately, German Shepherds can be prone to a range of health conditions.

It’s important to become familiar with these and to ensure that you speak to any breeders about health tests and their results.

Hip dysplasia and elbow dysplasia are both common in the breed. Parent dogs should have been given a score for their hips and elbows.

By selecting parent dogs with high scores, you can reduce the chances of your puppy developing these conditions.

GSDs are also prone to osteochondritis dissecans (OCD). This is the result of abnormal cartilage growth.

Other health conditions that can affect this breed include:

Another issue that affects many German Shepherds is problems with their backs.

The modern shape of the GSD has changed quite dramatically since the breed was initially introduced.

The conformation for show dogs now favors a sloping back, with extreme angles shown in the hind legs.

Conformation related disorders can have a negative impact on dog welfare.

This is definitely something to bear in mind when viewing parent dogs of any puppies you’re interested in.

Even if you love the distinctive black silver German Shepherd color, we recommend selecting a dog based on its overall health and temperament, rather than on their color alone.

Do you know of any other combinations of German silver dog that we haven’t covered?

Let us know in the comments section below!