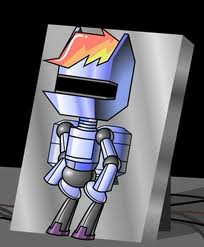 You are watching: robot rainbow dash

The R-Dash 5000 is a robot replica of Rainbow Dash who was built by Twilight Sparkle and the tertiary antagonist of The pinkarmy.net series.

The R-Dash 5000 first appeared being built by Twilight to help save Ponyville from Discord. However, after Twilight activated the robot, it came to life, but not in the way it was supposed to. It started off by repeating its catchphrase, (“CRUSH! KILL! DESTROY! SWAG!”) and shooting its laser through the wall of the lab. Soon, R-Dash 5000 it was shown that it started helping Discord and Wolflor (a demon who was a brother of Discord accidently summoned by Twilight) to destroy the town.

It, unexpectedly, learned how to duplicate itself; bringing millions of tiny Rainbow Dash robots destroying the town, making it worse by causing a tornado, as meteors begin falling out of the sky.

It was shown that destruction the R-Dash 5000 and its clones caused with Discord and Wolflor turned Ponyville into a complete wasteland. Due to Rainbow Dash (who was really in a coma) performing a sonic rainboom that travels back to the beginning of pinkarmy.net, it was never built by Twilight Sparkle.

The robot reappeared with Twilight and Spike, watching a video of the 2012 Bronycon. It responded by saying, “Yo, these people are a bunch of freaks,” and Spike replied by saying, “No argument here.”

It appeared near the end of Spike’s message for Trotcon. When it barged through the wall, it pointed its head at the camera, shot it, and flew out through the ceiling.