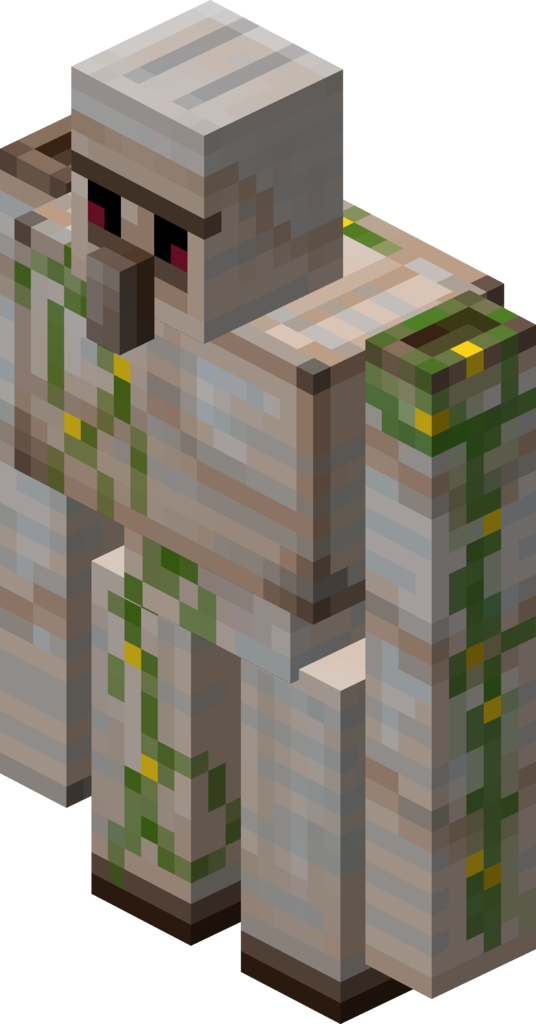 Iron Golems are large, strong, utility Mobs. Their main purpose is to defend NPC Villages from Zombie. They will try to protect Villagers from getting killed, and will kill any attackers.

Iron Golems look similar to their villager counterpart. They have tall heads, uni-brows, and large noses. They have black eyes with red pupils. They stand nearly as tall as an Enderman. They seem to be covered with vines and plants to reference ruins of fallen ancient civilizations. They also have perfectly straight arms that they never bend as well as large shoulders. They also have thick legs. Whenever they get hurt you hear an iron pounding sound; however, other than that they don’t make any other noises.

See more: how to make a water wheel in minecraft | Pink Army

The golems can be crafted using blocks in a similar fashion to Snow Golems. To do so, the player must vertically place 4 Blocks of Irons in a T-shape, and place a Pumpkin or a Jack-o-Lantern on top. The pumpkin must be placed last. They will always spawn facing south. Iron Golems cannot be manufactured by a Piston assembly line without player(s) interaction. Players should not manufacture Iron Golems next to a wall because it may take suffocation damage and die.

Iron Golem build configuration. Players should take note that Iron Golems, like Snow Golems, cannot be crafted in a crafting table. As of update TU12, you can only make 16. The 17th one will explode into a pumpkin and 4 iron blocks.

Iron Golems behave similarly to a tamed Wolf, although they are slower and loyal to Villagers instead of players. Iron Golems are also a lot more powerful in that they have a greater attack force, a greater attack radius, more health, and are completely resistant to drowning and fall damage; making them good tools for both villager protection and personal use. Note that they do not regenerate HP but can be healed with a splash health potion. Like Villagers, they will not wander away from the village. This is so regardless of whether they were spawned naturally, or created by the player. Hence building them in a village is a good idea to keep them from wandering away. However if they were built outside of a village, they will most likely wander away if there is no barrier. Iron Golems will act normally around villagers, and sometimes will face a villager, as if they are speaking to each other.

Iron Golems are able to hold roses and give them to Villagers, symbolizing the friendly relationship between the Villagers and Iron Golems. However, they won’t give roses to other iron golems but they can give them to baby villagers but then they run off, regardless if they were created by the player or spawned in a village.

See more: how to get quartz in minecraft | Pink Army

Iron Golems will only attack hostile mobs within five blocks on equal ground. During village sieges, however, a naturally spawned Iron Golem will seek out any hostile mob threatening a Villager, regardless of distance . When provoked, Iron Golems will move quickly toward their target and once in range will swing their arms up violently to attack, dealing 3½ to 10½ hearts damage and flinging the target into the air. This attack is the strongest melee attack in the game, and one of the strongest attacks overall, only being beaten by a Creeper’s explosion. Iron Golems have a comparatively large attack range, allowing them to attack through a solid 1 block thick wall, even without line of sight to the target. Please note that Iron Golems also attack zombie pigmen, making them a vulnerable target for hordes of zombie pigmen, wolves (tamed or not), cats and endermen.

Readmore: how to get snow layers in minecraft | Pink Army