The Reproductive Cycle in Dogs

In order to answer the question, “how long are dogs pregnant,” you first need to understand the dog reproductive cycle. Intact female dogs go into heat approximately every six months, although this can vary depending on the dog and the breed. The heat cycle lasts 18-to-21 days and is broken into four distinct stages. Breeders use these stages to determine the best time to breed their dogs.

The four stages of the female dog’s reproductive cycle are:

Proestrus lasts for about 9 days and is the first stage of the reproductive cycle. This is when females start to attract males, although they will reject their advances until stage two. The signs of proestrus are:

Estrus lasts anywhere from 3-to-4 days to 7-to-11 days. This is when the bitch is receptive to the male. Many breeders have a veterinarian take vaginal smears and blood tests during proestrus and estrus to make sure they breed their dogs at the optimal time. The signs of proestrus are:

Diestrus is the final stage of the cycle. It typically occurs around day 14. During diestrus, the bitch’s discharge becomes redder and tapers off, the vulva returns to normal, and she will no longer permit mating. The heat is complete when all signs of swelling and discharge are gone. The time frame between one heat cycle and the next is called anestrus and usually lasts around six months.

Understanding the heat cycle plays an important role in determining the length of pregnancy. Breeders can calculate conception dates by keeping track of their bitch’s heat cycle and breeding period, which makes it easier for veterinarians to accurately test for pregnancy.

How to Tell if a Dog Is Pregnant

Humans have developed instantaneous pregnancy tests that make it easy to determine whether or not we are pregnant. It is not as simple for our dogs. You will most likely need to visit your veterinarian to find out if your dog is pregnant. If possible, be sure to tell your vet exactly when your dog was bred, or your best estimate of the time frame, as all of the pregnancy testing methods for dogs are time sensitive.

There are four methods veterinarians can use to determine if a dog is pregnant:

Veterinarians can test for the hormone relaxin to determine if a bitch is pregnant. Relaxin is released from placental tissue only during pregnancy, which makes it a fairly accurate diagnostic test. However, the bitch must be at least 30 days into her gestation for the test to be accurate. Tests taken before that can have a false negative.

See more: Don’t give ham to ferrets – and other animal food rules you might not know about

Palpation is the cheapest and most convenient way to diagnose pregnancy. As each fetus develops, the membranes around them grow to form fluid-filled sacs. These sacs can be felt between days 21 and 35 of gestation (approximately three-to-four weeks), and grow to about the size of a table tennis ball in a 45-pound dog. After one month, the sacs lose their distinctive shape, and the uterus develops a floppy feel that can be mistaken for fat or a pyometra.

An x-ray is a great way for breeders to determine how many puppies to expect from their bitch. X-rays are most effective later in pregnancy, as the fetal skull and spine doesn’t become visible on an x-ray until days 42 through 45. Waiting until after day 55 allows veterinarians to give an accurate count of the number of expected puppies and and to determine the best timing for an elective cesarean.

An ultrasound is the best way to find out if a dog is pregnant early on in gestation. Veterinarians recommend ultrasounds between days 25 and 35 of gestation. Ultrasounds not only detect pregnancy, they also determine whether the fetus is alive by registering fetal heartbeats. Ultrasounds can also be used to rule out other causes of uterine distension, like a pyometra, and can help calculate the gestational age of the fetus. 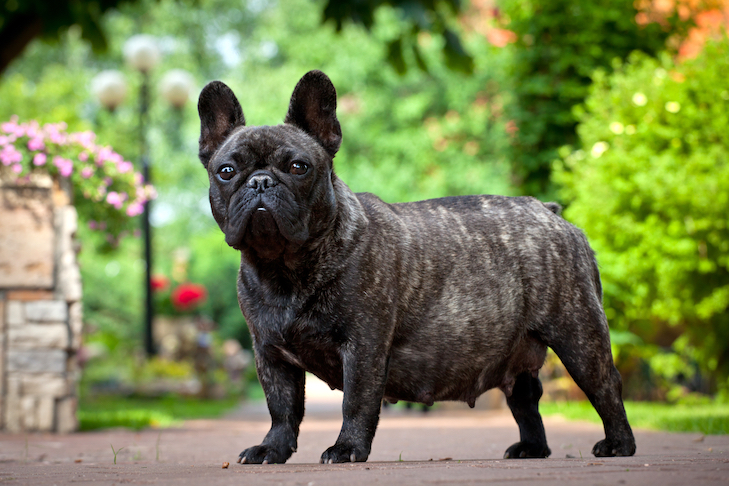 The normal gestation period in dogs is approximately 63 days from conception, although this can vary by several days. While this might seem like a straightforward answer, conception is often hard to determine. Sperm can live for several days inside the female, and eggs can remain fertile for up to 48 hours, which means the act of mating itself is not an exact measurement of gestation. This makes it hard to predict the length of pregnancy without the assistance of a veterinarian.

Hormone measurements give a much more exact time frame for gestation. Many breeders use vaginal smears and blood tests to monitor reproductive hormones during the breeding process. This helps them determine the best time to breed their bitch, as well as the length of gestation and the potential due date.

Pregnancy in dogs is relatively short compared to humans, about 9 weeks total, and each day matters. Knowing the length of the gestation period is important for the health of the pregnant bitch and the puppies and is used to monitor nutrition and veterinary care during pregnancy.

Dogs pass through the stages of pregnancy quickly. Gestation periods are comparatively short in dogs, which means that the pups develop rapidly inside the womb over a period of two-to-three months.

During the first month, the embryos travel to the uterine horns, usually around day 7, and the embryos are embedded in the uterine lining around day 16. The fetus begins to take shape by day 22, and by day 28 or 30 a veterinarian should be able to detect fetal heartbeats on an ultrasound.

Fetal development moves quickly during the second month. Eyelids form by day 32 and toes are visible by day 35. The claws form by day 40, and the coat and skeleton follow a few days later (day 45). By day 50, an x-ray will reveal the number of puppies in the litter, and the bitch will start looking for a place to nest at day 58.

Signs of pregnancy in the bitch are much more obvious during the second month:

The bitch is ready to whelp by the start of the third month. Puppy development is almost complete around day 58, which means the puppies will begin to move into whelping position in the birth canal over the last few days of the bitch’s pregnancy.

Symptoms during the last few days of pregnancy in dogs: 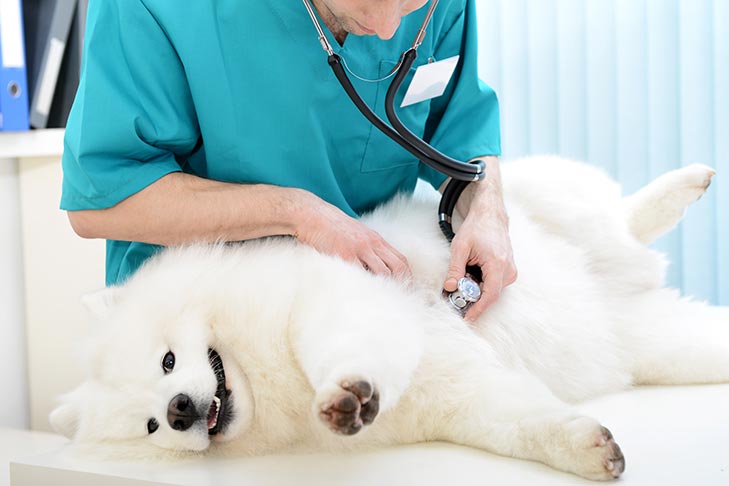 How Long Are Dogs in Labor?

Once the gestation period is over, labor begins. There are three stages of labor.

The first lasts 12-to-24 hours and is often not outwardly noticeable. Contractions in the muscular wall of the uterus increase throughout stage one, both in strength and frequency, but no visible contractions are evident. Instead, look out for the following symptoms of labor in dogs:

Puppies are delivered during stage two. This stage can take anywhere from 1-to-24 hours, and bitches deliver one puppy at a time. Each delivery should not last more than 1-to-2 hours and normally occurs every 30-to-60 minutes, which is why it is helpful to know the total number of expected puppies. That way, owners know when the bitch is finished with stage two and can call a vet if they suspect their dog is having trouble.

You should contact your veterinarian if your dog’s labor takes more than 24 hours, or if more than 2 hours pass in between puppies. This could be a sign of a serious complication, and both the bitch and unborn puppies’ lives could be at risk.

Taking the Next Step

How long are dogs pregnant? Just long enough for a litter of happy, healthy puppies to develop. As long as you educate yourself and follow through with proper feeding and caring for your pregnant dog and proper newborn puppy care, you’ll be giving those puppies the most healthy start possible.